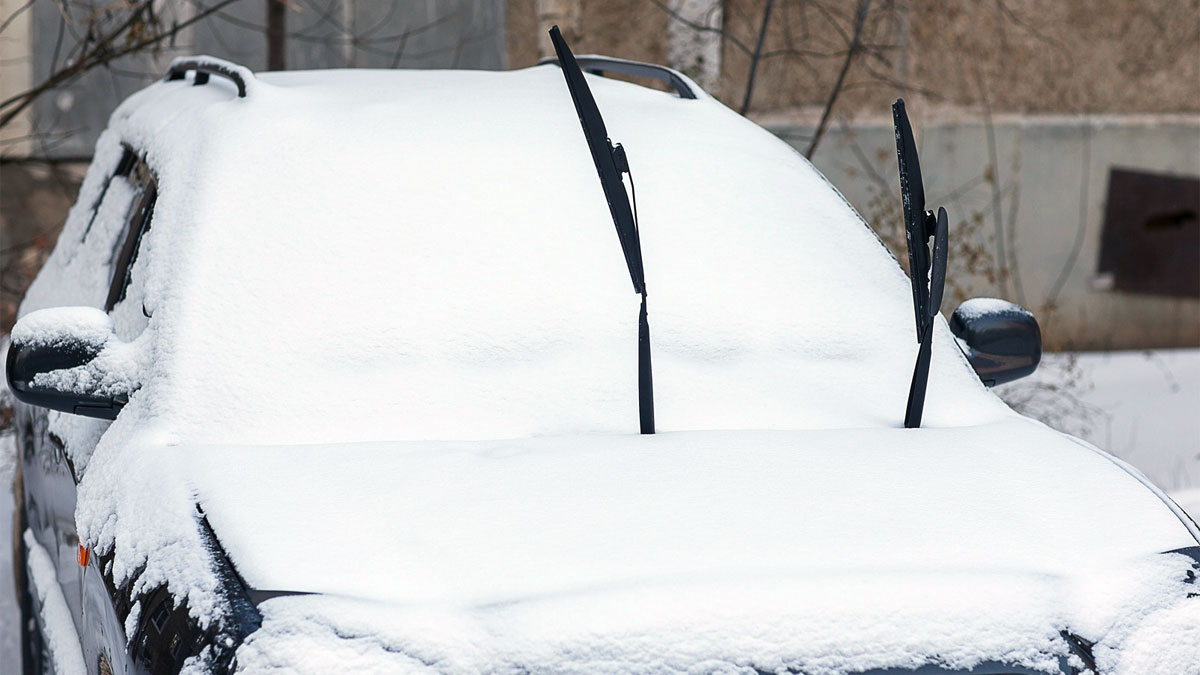 Have you ever noticed your neighbors leaving the wipers up on their cars when it snows? Whether or not to raise your windshield wipers when it snows is a hotly debated topic, with points for and against. We wondered what the advantages were and if it made a difference, and decided to find out.

Pros include reducing the risk of torn rubber as the blades will not get iced to the glass. However, you risk the gears and wipers getting damaged or snapped by wind and snow. Advice is mixed when it comes to putting your car’s windshield wipers up when snow is forecast.

What is clear is that people can’t seem to agree on whether up or down is better. Car owners who preferred leaving them up claimed it prevented the wipers freezing to the window, while others said leaving them up could damage them in a storm.

Should I Put My Windshield Wipers Up or Down When It Snows?

The benefit of leaving your wipers up is less risk of your windshield wipers getting stuck to the window by ice. When iced to the glass, the rubber can tear or be damaged. It also makes scraping your window much easier, as the wipers are already up and out of the way.

Many motorists have accidentally left their wipers in the ON position after turning the vehicle off only to then have them automatically switch on as soon as they start the car the very next time. The problem then is that the rubber blades may have frozen to the windshield and then actually tear upon first use.

It’s also possible to damage the rubber inadvertently when trying to scrape ice and snow away from the wipers before lifting them up.

However, leaving them up can weaken the gearing for the wipers, especially if a blast of strong wind moves them about. The weight of heavy snowfall (we’re looking at you Buffalo!) can also damage them.

Wipers in the up position are also more prone to being broken by storm winds or vandals. Windshield wipers are not designed to stand up and away from the window for long periods. This unnecessary stress can cause them to sit too loose and knock against the glass as they drive.

In most cases, car owners are advised not to leave their wipers up when it snows.

When Should I Put My Windshield Wipers Up? 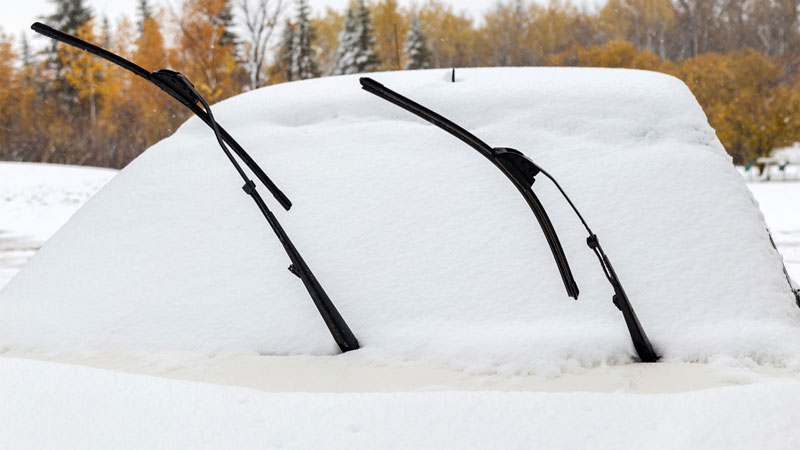 Some wiper manufacturers state it’s OK to leave the windshield wipers up, as their components are designed to bear the stress. They claim that leaving the wipers up away from the windshield prevents ice build-up and subsequent damage.

However, in most cases, it’s preferable to only put the wipers up when you need to clean or de-ice the window. According to CAA Quebec, where icy winters are typical, the advice to leave the wipers up when storms are forecast is not a good idea.

They also suggest that there is a possibility that windshield wipers could snap back under a heavy gust of wind and crack the glass.

They do not recommend using your wipers to sweep the snow from the windshield, as this can damage and warp the rubber blades.

How Do You Protect Windshield Wipers From Snow? 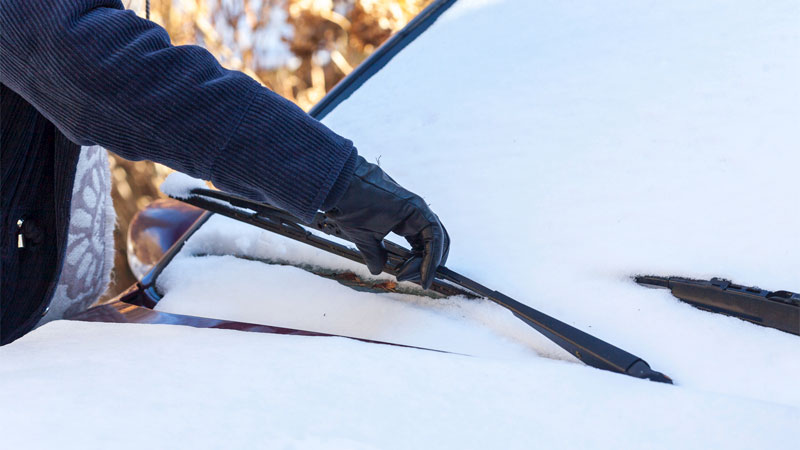 Since leaving your wipers up isn’t a great idea, how do you protect them from becoming damaged by snow and ice?

The rubber wipers can easily be ruined by using them on dry windows or on gritty, uneven surfaces. You can avoid these issues by following these simple guidelines:

What Happens If You Don’t Put Your Windshield Wipers Up When It Snows?

Of course, you may prefer to keep the windshield wipers up to make cleaning snow and ice from your window easier.

When the wipers are left down, they can freeze to the windshield, making it hard to move them for cleaning. You can easily damage the stuck wipers by accidentally switching them on or while trying to scrape the ice.

Unfortunately, turning the wipers on while they are iced in place can put a lot of stress on the wiper motors, which are more expensive to replace than the blades.

If you try to pull the blades free from the ice, the delicate rubber can tear, which is why many people prefer leaving their windshield wiper blades free. Before attempting to work the blades free, start your car and run your defroster for a while to help avoid damage.

For those who prefer to leave the wipers up, make sure that you switch the wipers off before you switch off your car. This will ensure that the wipers don’t accidentally begin moving when you restart your vehicle.

You may only need to lift the wipers away from the window rather than pull them out to their maximum extension. Many newer vehicles have instructions for placing your wipers in what’s known as either ‘snow mode’ or service position.’ Check your car manual for this information. 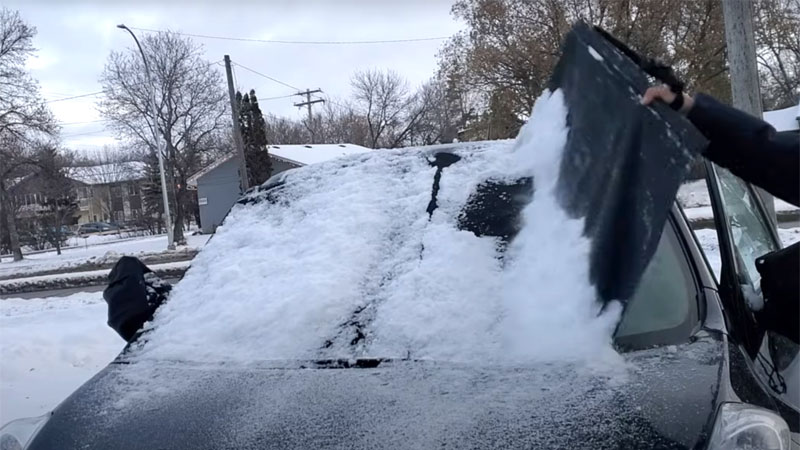 If you don’t have a cover, you can help prevent your windows from freezing or de-icing them. You can use a store-bought solution or make your own.

One homemade de-icer recipe is to mix three parts vinegar with one part water. You can also use two parts rubbing alcohol to 1 part water. Both of these work by having lower freezing points than water. However, they will not make much difference if the temperatures drop well below freezing.

You can use these same mixtures on the rubber blades of your windshield wipers to help protect them.

One of the best things you can do to make lifting or moving the blades easier is to run your car’s defroster on high for several minutes.

What you should NEVER do is throw hot or boiling water onto your frozen windshield. While it may seem logical for quick melting, very hot water making contact with frozen glass causes it to become more brittle and likely to crack at a sudden temperature change.

You may prefer to leave your windshield wipers up when snow is forecast, but there can be downsides, as the gears and joints may be damaged or weakened by heavy snow and winds.

Alternatively, leaving the wipers down could damage the rubber when scraping the glass or pulling the wipers free from the ice. The best thing to do is cover your window and wipers with a snow-proof windshield cover.